Ariana Grande has always had quite the impressive stage attire. It features lots of her daily styles but with the volume turned up to 11. The results are always quite impressive.

And they are even more impressive for her latest stage performances. Ariana’s latest outfits are sizzling with hotness, style and… lots of towering thigh high boots.

This month Ariana already had a few big performances. One of them was at the 2018 iHeartRadio by AT&T at Banc of California Stadium in Los Angeles.

For that event Ariana rocked an impressive two-piece dress with a cut-out sparkling top. It was teamed with a short, but wide A-line style skirt. The skirt featured shiny, metallic fabric which looked like leather and latex, but wasn’t either.

Ariana teamed the already hot outfit with a pair of black leather thigh high boots. The boots were on a medium platform with thin, sky high heels. Just the style Ariana has always liked.

Ariana also kept her trademark ponytail hairstyle. This time her hair was in braids and was looking even longer than usual.

A bit later in the month Ariana was at the Songwriters Hall of Fame 49th Annual Induction and Awards Dinner at New York Marriott Marquis Hotel. There she had a special performance and was all about style.

For this performance Ariana opted for an elegant long black satin dress. It was a classic piece with thin shoulder straps and was well fitted all the way to the ground. No splits, no daring makeup.

Ariana was very elegant, still rocking her ponytail, but this time her hair was straightened with slight volume and looked like a waterfall on her shoulders. Her footwear was also elegant high heels, which remained well hidden for the most part thanks to the long dress.

The 2015 London Fashion Week is underway. While there has already been great stuff shown...

Kendall Jenner is on quite a roll lately, rocking very provocative outfits. This time she...

We’ve been waiting for this for a long time. Nina Dobrev and Victoria Justice at...

Leigh-Anne Pinnock from the British girl band Little Mix had a birthday. Her colleagues celebrated... 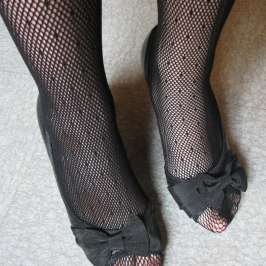 For years wearing socks with high heels was a big no-no in the fashion world....