Anne Hathaway had quite a busy year in 2006. She was one of the stars of the near-iconic movie “The Devil Wears Prada”. And she toured the world promoting the movie in several great outfits and high heels.

Anne rocked several great styles during the promotional tour. She was always elegant, sometimes even casual. Her style was definitely one to remember.

And we do. More than 11 years later, Anne impresses with her timeless style from these events. And yes, we have not one but four great choices.

The first one is from the premiere of The Devil Wears Prada from June 2006 in Los Angeles. There Anne impressed with a simple and elegant yellow dress.

The shoulder-less piece featured a simple loose fit and reached to the knees. Anne teamed it with a pair of elegant copper-like embellished peep-toe high heels. The shoes featured small platforms at the front to make them even more comfortable.

Anne looked great with a long, flowing black hair. She added a few jewels and a clutch bag to complete her beautiful and elegant style.

Then in September 2006 Anne had three more events for the movie. One of them was a photocall for the 63rd Venice Film Festival.

For it Anne opted for an interesting black dress with white dots which also featured an intricate white piece. That piece acted as a shoulder-neck strap for the dress, but also transformed around the waist into a belt. And it was with black dots.

Anne teamed the elegant dress with a pair of patent black high heels. The shoes featured elegant medium-height heels and looked great with the dress. Anne now had a slightly different hairstyle. It was a brown-ish shade and a bit shorted. She also opted for less jewels, but still looked very elegant.

A couple of days later,, Anne was at the 32nd Annual Deauville American Film Festival. She also promoted the movie there, but this time in a much more casual outfit.

Hathaway rocked and elegant white shirt which she teamed with a pair of blue jeans. To that she added a pair of leopard-printed high heels. She looked quite good in that casual, but stylish outfit.

Again, her hair was loose, and she didn’t go overboard with the jewels. Classy and simple. Nice.

Lather in the month Anne made her way to Tokyo, again to promote The Devil Wears Prada.

This time she opted for an attractive, loose-fitting dress with a thin strap around the waist.  The elegant dress looked great on Anne. And she added even more points to the outfit thanks to the footwear.

Anne rocked a pair of elegant black leather knee high boots. The boots featured medium height blocky high heels. They appeared even shorter thanks to several leather straps that were going around the ankle, foot and heel.

Anne again rocked her hair long and loose. She sported an almost no-makeup look and looked great. So, you can easily see why 11 years later all four outfits and looks of Anne are still timely and great. 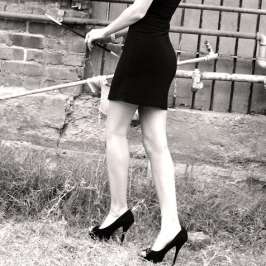 Elizabeth Olsen gave us a tutorial on how to steal the show. She was at...

Jessica Simpson revealed to Jimmy Fallon that she loves high heels so much that she...

Ariana Grande is back on the stage and she looks better than ever! She performed...

New Year’s Eve is a busy time for singers as they have lots of appearances...