You love wearing sexy high heels all the time. But you don’t because you keep getting beauty-shamed. Being beautiful should not be seen as a bad thing.

There seems to be a social stigma on beautiful women. If you are a beautiful woman you can’t be in a high position. You can only be a bimbo or a fashion model at the best.

That’s the notion one gets from most people when they see a beautiful woman in an equally beautiful outfit, killer heels and so on. The shock people get when they hear that this same woman is a vice-president in a company for example is big. Or they simply think she got to the position using “other” methods.

While that may be true for some cases, it is not the absolute and only truth. Yet, people love to generalize. In a world where everybody scream for equality, there are some strange outcomes. One of the strangest if the idea that the woman in a tight skirt, killer high heels, nice hair and make up with slim body you see walking around in an office floor can only be the secretary of the boss.

She can be the owner. Take Jaanika Merilo for example. She is an Estonian with Ukrainian origin and is the executive director of a Kyiv-based investment company. She is also an adviser to the Ukraine economics and trade minister. Yet, she is gorgeous.

But, after the news broke out she was appointed as an adviser, Facebook was flooded with her pictures. Some of them are from a photo shoot she did a while back, reproducing classic Angelina Jolie’s pictures. But people labeled them as scandalous and provoking, Kyiv Post reports.

People were writing she is “obviously stupid” and can’t do her job. Other said she got the job with other means.

Ukraine’s deputy Interior minister is also a beautiful woman. Eka Zguladze is also often berated because of her looks, claiming she is not suitable for the job.

Since when how you look mattered for a job other than being a fashion or a fitness model? Oten people tend to judge other people for their looks and clothes. It is said that clothes make the man, but that does not mean you should have a full complete and finished opinion.

“I can think of at least two recent cases when two young Ukrainian female journalists were not victims, but aggressors in this matter. Each of them on separate occasions have put photos of young women on Facebook, who they encountered when reporting in the parliament, because the women wore amusingly short skirts or high heels. They mocked the women and presented them to an army of vulgar commentators. They have reacted at once, hinting on the featured women poor intellects and rich sex life. Both photos, note it, were taken and published without permission.

This is a very sorrowful trend because of what it indicates – a vulgar, rudimentary society. Beauty is irrelevant to a woman’s career. Red lipstick can be worn by a top professional. Sometimes a short skirt is just a short skirt. There are no intellect markers in a person’s looks – they are in the person’s work”, Rudenko writes. 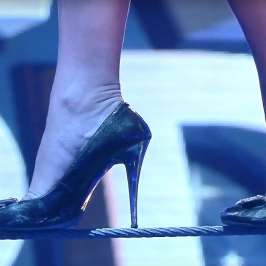 If you think walking in high heels on cobbled road is tough, think again! This...

We can rarely see Maggie Q at events which is sad as she’s great. But...

Time sure does fly when you are having fun. Selecting the best celebrities in high...