Charlize Theron knows how to kick ass. She’s shown us that in more than one movie. And she did so during Comic-Con in San Diego, too, rocking OTK boots.

Charlize was on the panel of Entertainment Weekly’s “Women Who Kick Ass” during Comic-Con. And yes, she did that with her fashion style, too.

She has been quite busy lately, flying around the world to promote new movies, evens and etc. During this entire time though Charlize has remained on a constant top form for her fashion looks as well.

Her appearance at the Comic-Con event was no different. This time though she decided to be more daring while also rocking an elegant style.

The result was impressive. Charlize opted for a short black dress with buttons on the front. The dress looked like a slightly oversized shirt.

She teamed the dress with a pair of elegant over-the-knee black leather boots. They had a slightly slouched design and pointed toes.

The boots featured thick, medium height cone heels. This made them quite comfortable to walk and… well, kick ass.

Charlize rocked her hair pulled back, but mostly loose and opted for only a dash of accenting makeup. She added some golden rings and jewels and that was it. A very simple, yet very powerful outfit. Just right for the theme of event.

Singer Alice Chater made everyone notice at the Alice Through The Looking Glass Premiere. She... 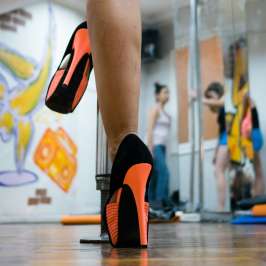 Walking in heels is one thing but being able to dance in high heels is...

It was only the second day of the new year and celebrities are already busy... 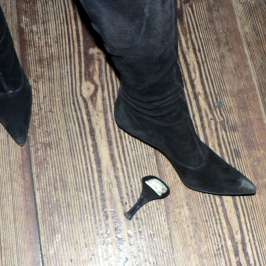 As much as we love high heels, we also admit that they bring their fair...

Sometimes we miss out on some stunning outfits and looks from celebrities in all of... 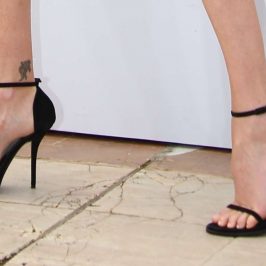 Karlie Kloss is back in the spotlight. As always she does it with stunning style...