Christina Aguilera made her long awaited return to the stage at the 2018 Billboard Music Awards. And she did that in a memorable style in an impressive performance with Demi Lovato. And there were quite a lot of other fashionable celebs in heels at the event.

Christina and Demi took the attention away with their duet. Both of them rocked stunning leather outifts along with high boots.

Christina definitely hasn’t missed a beat. She looked and performed great and her outfit was a great addition to the overall spectacle.

It was a simple, yet powerful look. One that leather and high boots make achieving easy.

Ariana Grande also opted for boots for the 2018 Billboard Music Awards. She though teamed them with a short, flared dress.

Taylor Swift decided to impress with a long pink dress. It was quite the piece, featuring side splits revealing almost her entire legs.

Taylor also rocked a pair of elegant high heels. They matched the dress well and added further style and elegance to her look. The platform heels were stunning.

Jenna Dewan also impressed with a leather outfit. She opted for a fringe-style little black dress. In leather and caps.

Jenna continued the style with her shoes, too. They were black, ankle-strapped high heels and the straps had golden spikes, too.

Jennifer Lopez also opted for leather as a main part of her outfit. She rocked an unbuttoned, fabric crock-skin like shirt and bra which she teamed with a burgundy hug-me leather skirt.

The skirt was with a high split and revealed lots of Jennifer’s legs. And she used that to show off her color-matched leather thigh high boots.

Erika Jayne looked elegant in a little black dress which had a long side train. She also rocked a pair of elegant blue high heels in a classic style.

Erika kept her hair long and loose and rocked several bracelets on her arm. The end result was quite good.

Tyra Banks looked as great as ever, too. She rocked a fitted black dress with interesting sleeves.

Her footwear was also interesting. Tyra was walking in a pair of elegant high heels with peal-like ankle-straps.

Chantel Jeffries also opted for a impressive outfit. Again a crock-skin style, but a jumper.

And it was once again teamed with high heels. This time a pair of strapped- elegant high heels.

And she teamed the dress with a pair of platform golden high heels. She did look a bit tired, though.

Those were the celebrities which were were most impressed with at the 2018 Billboard Music Awards. There were a lot more, though. The new trend seems to be crock-skin fabrics to go along with the platform high heels.

Rihanna’s new Anti World Tour has kicked off. As you can expect, the famous singer...

They say true love can withstand anything. That’s seems to be the case with Victoria...

Dakota Fanning showed her most glamorous and sparkling side in high heels at the premiere...

Hailee Steinfeld is one of the celebrities who you can always turn to for great... 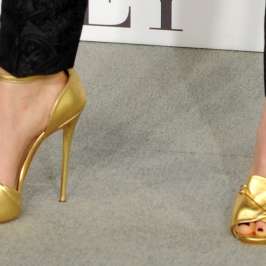 The movie Fifty Shades of Grey is a bit controversial, but that’s what makes the... 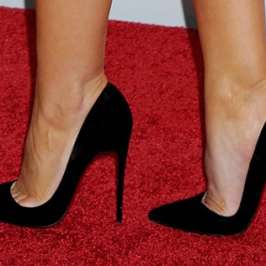 The Milan Fashion Week Spring Summer 2015 showed us a lot of what to expect...