The 2017 MTV VMAs were quite the event. Some celebrities then went to the Republic Records after party and impress with yet another outfit.

Three of them caught our attention quite easily. They were Hailee Steinfeld, Hailey Baldwin and Nina Dobrev.

They weren’t necessarily together at the event, but were among the most impressive ones. Two of them opted for boots as their main footwear, too.

Hailee Steinfeld continued her streak of one stunning outfit and look after another. She once again wowed in a minidress and what minidress it was!

Hailee rocked a little white dress with a swooping pink fringe detail around the front. The dress accented her figure and was quite provocative.

To be even more daring, Hailee teamed it with a pair of over-the-knee suede boots. They featured pointed toes and thin metal heels.

Hailee looked as daring as ever by keeping her long hair loose and adding accented eyelashes and eyeliner. Quite impressive to say the least.

Next up, Nina Dobrev. She looked good in a daring red suit. We say daring, as it was only a top jacket and nothing underneath, so it provided for some risky views.

Nina’s footwear was also impressive. She opted for a pair of black booties with a wedged, heel-less design.

She also opted to keep her hair loose. And she also rocked more accenting makeup, including bright red lipstick.

Finally, Hailey Baldwin. She stuck to her quite daring style and look. This time she achieved it with a more casual outfit, featuring denim hotpants and loose T-shirt.

Hailey teamed that simple outfit with a pair of knee-high suede boots. They had classic pointy toes and thin heels.

She added further punch to her look with accented eyeliner and also kept her hair loose. All three celebrities looked quite good.

Mariah Carey is back in the spotlight with her new tour and album. She also...

Emma Roberts has always had an unique style. She showed it in full force in...

Rihanna showed off an elegant style in a purple dress and strapped high heels in... 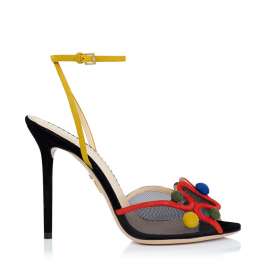 Spring is here and it is time for the traditional spring cleaning. Don’t neglect your...

The 88th Annual Academy Awards aka The Oscars Ceremony is over. A lot happened. Including...