The amfAR gala events have become a traditional place to see some of the most impressive fashion choices. The special amfAR Gala against AIDS for the 71st Cannes Film Festival was no exception. So, it’s no surprise that the winners come from this event.

And it was quite the event. It was very glamorous, very festive and quite impressive. As a result, there were quite a lot of stunning attendees and celebrities in high heels at the event.

This made our choices quite difficult. But, as always, we managed to pick the ones that we liked the most. And we’ve even tried to keep the number of celebs to a minimum to make it more challenging. Well…maybe… not quite…

So, here are our latest high heel celebrities of the week. And they are all from the amfAR Gala at the 2018 Cannes Film Festival.

Sara Sampaio impressed with a long blue dress which featured a high split over the entire left leg. Sara teamed the dress with a pair of elegant ankle-strapped high heels.

She also liked her look quite a lot. So much, she posed for a few impressive photos at the event.

Paris Hilton and Nicole Scherzinger also impressed at the event. They both opted for long, body-hugging dresses in pastel colors and lots of flowers on them

This is a new trend which is forming in evening dresses. Looks good when you know how to do it.

Kristen Stewart kept true to her unique style, too. She opted for an interesting black and white dress.

And she teamed the dress with a pair of elegant pumps. They featured pointed toes and spike heels.

Pretty much all supermodels also won as they all impressed with stunning outfits and elegant high heels.

Some of the other guests also impressed with quite the styles.

Her photos looked like coming straight from a classic fairytale.

OK, by now you’ve probably guessed why we chose pretty much everyone at the amfAR Gala in Cannes. It was a rare event where there were little to none fashion missteps.

Sure, there probably were some, but they were so few and far in-between that the rest of the impressive fashion choices and celebs made them invisible. So, we better stop now, before this gets way, too long.

Victoria Beckham has one of the biggest archives of stunning pictures in equally amazing high...

Blake Lively had a busy day when she had to rock three different outfits in...

Kendall Jenner has been busy on the runways with all of the fashion week events....

Karlie Kloss and Brooke Burke are no strangers to the high style and daring hihgh... 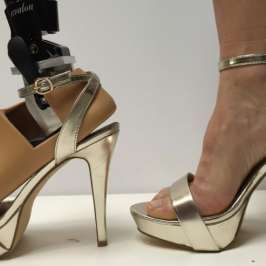 Ladies who have lost a leg to disease or injury will still be able to...

eeping your shoes clean is vital not only for their good looks, but also for...