Lately, Gigi Hadid has been transforming her look and style quite well. This all peaked at Glamour’s 2017 Women of the Year Awards were Gigi was incredible.

You’ve seen her from the event all week. But we chose to show amazing restraint and keep her stunning look and outfit for a whole week.

Why? Because pretty much no one came close to Gigi’s incredible look from the event. And that’s quite telling when you have a whole week and no one can top you.

So, it’s one of the most stunning looks from Gigi ever and it’s bound to get better. Why? Because Gigi seems to have found a whole new style and it’s one that suits her quite well and she knows it.

But enough praise. Let’s get to work. Gigi was looking incredible in a body hugging closed embellished bronze gown by Zuhair Murad.

The dress featured a high neck, all-over embellishment and “statement sleeves” that create a cape-like effect. It’s definitely a stunning dress, but it’s a couture piece from the AW16 collection, so you can’t buy it unless you are very close with Zuhair.

The dress was certainly a huge challenge to wear. Even Gigi, who’s used to such outfits, had a bit of an issue and tripped over the dress. Thankfully, she was holding hands with her sister Bella at the moment and she kept her from falling.

Gigi’s sky high Louboutin high heels also didn’t help for the situation. Even so, she managed to steady herself and laughed at the ordeal.

Gigi wasn’t done though. She showed off her new longer and even more elegant hairstyle. She also opted for dress-matching makeup and jewels. The end result is stunning, as we’ve already said. It will definitely go down as one of Gigi’s all-time great outfits and looks. And we’re expecting that it will also kick off several more contenders in the future, as well. 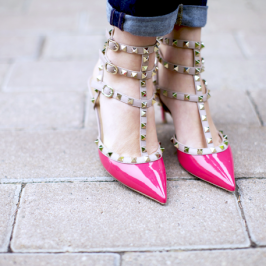 Valentino’s Rockstud high heels have proven to be very popular. They have doubled the sales...

Miranda Kerr is once again showing us how to effortlessly style a great look. This... 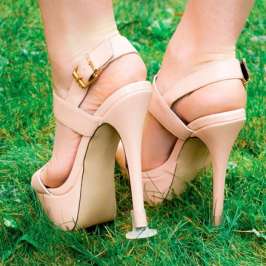 Walking on grass can be a real pain in the bum if you are wearing...

The Victoria’s Secret Fashion Show is always the time of the year where some of...

If there’s a guarantee for something is that your high heels can and will break...