Selena Gomez is once again winning our high heel celebrity of the week chart. She stunned everyone in New York by going out in two amazing red outfits.

We’ve said several times before that Selena is on a huge fashion roll and ups her fashion game almost every time. So we will say it again or as one of her fans said: “Fashion model casual strolling level reached”.

The fan is right on point. Selena was seen out and about in New York rocking two stunning red outfits within a few hours. Both times she was looking like a million bucks.

The first outfit featured a loose fitting sequin short dress. Selena had teamed it with a pair of silver strapped high heels.

She rocked her hair loose and daring and had opted for a bit more accenting and daring makeup than usual. Completing her look was a pair of big diamond earrings. Needless to say, she turned quite a lot of heads.

But that was not all, folks! A little later Selena was spotted again.

This time she rocked a long fitted silk red dress. It was teamed with a pair of golden ankle-strapped high heels.

She had on the same earrings, makeup and hairstyle.

And if that’s not enough, she even rocked the first outfit in a third pair of high heels! This time black, peep toe platforms with ankle straps.

Which look of Selena was the best? We can’t choose. So that’s why we pick all three for the high heel celebrity of the week title!

Karlie Kloss continues to impress with her style. Including when she is simply out and...

Well, this is going to be a difficult one. We like Mary Elizabeth Winstead. She’s...

Over the years, Miley Cyrus has had quite a few transformations. Back in 2008 she...

Denim is one of the all-time constants in the fashion world and can be great... 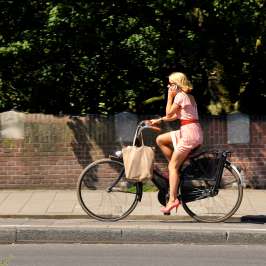 New High Octane Ride bikes claim they can get you fit by doing 10 minute...

The 2018 amfAR Gala in New York once again gathered quite the impressive guest list...