In the latest “high heels are the worst thing ever” publication, a study claims injuries from high heels have doubled in the past decade. Which is normal…

But first the study. It was carried by the University of Alabama in Birmingham. It says that between 2002 and 2012 the high heeled-related injuries doubled. The year with the most accidents was 2011 when more than 19 000 accidends were reported. For the whole decade a total of 123 355 injuries were noted.

After Flatgate the media and high heel haters jumped on this news like it is the biggest sensation ever. And in turned out to be a classic case of using statistics to manipulate the message. But lets dig in these numbers just a little and add some context, shall we?

According to the American Osteopathic Assotiation one in 10 women wear high heels at least three days a week and a third of them have fallen at least once while wearing them. The number of women that wear high heels on occasion is even bigger.

So out of these millions upon million of women wearing high heels, there have been only 123 355 injuries related to them for the whole decade. That is a pretty small percentage.

During the said period there was a big economic boom. So many more women could afford high heels and started to wear them a lot more as an addition to the miniskirt rule and the economy (the better the economy, the shorter the skirts of women the theory says and skirts go best with heels). So it is not that surprising there are more injures. It is natural when there are more people wearing heels, but no one has factored that into the results which makes them skewed from the start.

The authors don’t say you should never ever wear high heels again. They say you should not wear ONLY high heels for long periods of time. Mix those shoes, practice your feet and take good care of yourself. Just the other day we saw a woman spraining her ankle when she took a mere step off the curb on the street. She was wearing flat shoes. So, should we come out saying all flats are bad? No. Simply watch your feet when your walk.

And don’t fall for the media overhype. Yes, high heels carry risks. ALL shoes carry risks. If heels were so bad, they wouldn’t have been around since Persian times. The solution is simple – moderation. Don’t force yourself in high heels all the time. Wear different shoes too and you will be fine. And watch where you step at all times.

Tired of the usual high heels? You want something more cute and unique? Primark has...

Christmas is here! This means a lot of various Christmas parties and lots of opportunities... 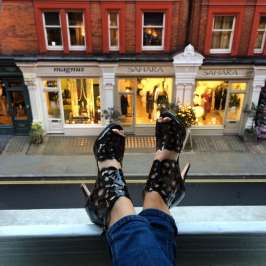 Need more comfort when wearing high heels? The insole of the shoes are very important... 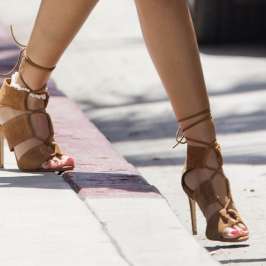 High heels can be comfortable. Yes, they really can. It all depends on the type...

Victoria Justice is one of the most stylish celebrities. She is often wearing high heels,...