Paris Hilton is a fashion icon for a good reason. She has been involved in the fashion world for quite a while now and has started many trends.

Now it seems she may be trying to start a new high heel fashion trend. Or is he really?

It all happened during her latest appearance on the Tonight Show Starring Jimmy Fallon. Paris was a guest there and came out wearing a glamorous green sequin dress and a pair of elegant high heels.

But eagle-eyed views immediately saw that something wasn’t quite right with Paris’ look. It turned out she was wearing to very different shoes. Both were elegant stiletto high heels, but with very different designs.

One of them was a simple, classic nude style heel while the other one was a silver sequin-mesh style which went in tune with Paris’ overall sparking look. Nothing was said during the show about the style, but the Tonight Show’s TikTok brought attention to the look.

Later Paris posted a video response to the video in which she watches the same video and jokingly facepalms as she sees herself. Paris seems to notion that this was a mistake and not planned.

And it certainly seems so, as between commercials during the show, she does indeed change the nude heel for a matching sequin one. This certainly brings a lot more questions.

Considering how many stylists take care of celebrities’ look, it’s not possible to not see such a mistake. Paris herself also will see and feel the difference in the shoes.

One possibility is that there was an issue with one of the shoes or it was misplaced, but then why not simply change the entire pair? It seems far more logical that it was done on purpose for attention. But then, why change the shoe during commercials?

If one thing is for sure it’s that Paris Hilton certainly knows how to draw attention. And her fashion “mishap” certainly did get a lot of it. In fact, most people didn’t mind and even liked the idea.

Social media was full with claims that Hilton may have started a new trend. The Tonight Show also jumped on that bandwagon claiming this is the start of a new fashion trend.

It’s not the first time people have been wearing mis-matched shoes, but it has usually been for scenic purposes, costumes, parties, etc. Paris’ experiment shows that it can also be done in somewhat more formal settings. With that in mind though, you must be on the top of your fashion game to pull it off.

Christina Aguilera is making her way back in the spotlight and everyone are taking notice....

Olivia Culpo once again wins our high heel celebrity of the week. This time though... 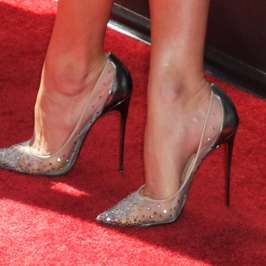 The 2015 ESPY Awards by ESPN gathered the top stars from sports and entertainment all... 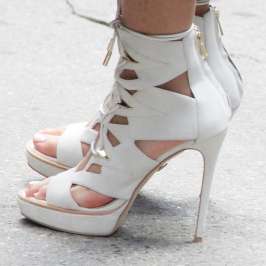 Zendaya is joining the celebrities with their own shoe lines. The actress and singer is...

The 2017 MTV Movie and TV Awards in LA gathered quite a lot of celebrities.... 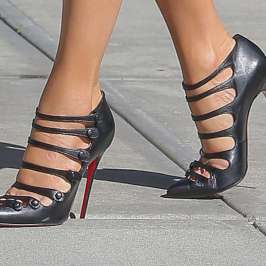 Jennifer Lopez is one of the all time great singers. Apart from having a great...