Models Joan Smalls and Xenia Tchoumitcheva wowed in daring outfits featuring leather and boots during the Paris Fashion Week. That was their street style.

Both supermodels were at different events, but had similar ideas for their styles – daring and glamorous. The end results were quite impressive.

Joan Smalls opted for a stylish, but provocative look. She rocked a plaid coat which she just threw on her shoulders.

The coat was unbuttoned to show off Joan’s main outfit. It featured a shiny blue leather dress. It was well fitted, completely closed at the top, but with a very short skirt part.

Joan rocked a pair of matching blue OTK boots to go with the dress. The boots had a slightly looser fit and featured thin high heels and pointed toes.

Joan completed her look with a blue purse which had a thick strap. She rocked a pair of elegant sunglasses and kept her hair in a but for a stylish look.

Xenia Tchoumitcheva on the other hand opted for more provocativeness in her look. She also rocked a stylish coat for a top, but it was shorter and teamed with a self-branded T-shirt. Xenia tucked the shirt into a shiny red skirt which mimicked PVC.

The highlight of her look though were the boots. Xenia rocked a pair of black leather thigh high boots with side lacing. The boots also had very thin heels, but Xenia managed it with ease despite the rough pavement.

She opted to rock more jewels, a stylish purse and kept her hair long and straight. Xenia completed her look with heavier makeup, too.

In the end, both supermodels looked… super. Xenia might have been a bit too daring for some tastes, but we liked her look.

Singer and actress Hailee Steinfeld continues to raise her fashion bar. She’s wowed with a...

Celebrities are the ones that usually put fashion products on the map. And they can... 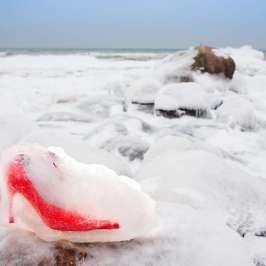 Wearing high heels in the winter can be a bit of a challenge. Especially when... 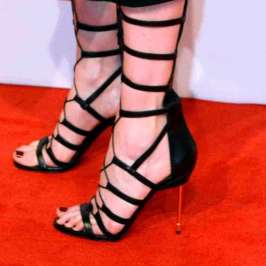 October 2015 was a pretty active month for most celebrities which is why it took...

Nicole Scherzinger was one of the top celebrities at the Dinner for the Global Gift... 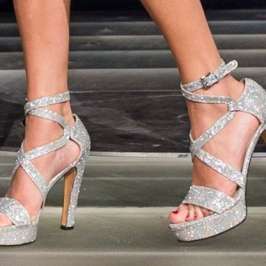 Christina Aguilera made her long awaited return to the stage at the 2018 Billboard Music...