Kylie Jenner seems to be back in the spotlight once again. This time with an impressive elegant, but still provocative style for her latest outfit.

Kylie was at The Nice Guy restaurant in West Hollywood once again. Her outfit for this time was an impressive one for sure.

Kylie rocked a stunning long bronze dress. It had a low cut with two thin straps around the shoulders. Most of the dress was a fitted, but slightly slouched design.

It also featured a long split over the left leg. Even so, Kylie decided to pick up and pull up the other part of the dress, too. Thus she revealed both of her legs almost entirely.

To be honest, we’re not sure why Kylie did that. The weather was dry, so there was no danger for the dress to get wet. It wasn’t long enough or tight enough either to make walking more difficult.

So, there’s only one reason left. Kylie simply wanted to do so, to attract even more attention. And she managed to do just that.

Her footwear also helped for that. Kylie opted for a pair of matching bronze high heels. This time though they were with an unusual design. They featured an interesting strap that went around the foot, not on top of it.

Small chains held the strap in place. And also at the toes – furry straps for an extra dose of cuteness. The actual heels where thin and sky high. Kylie also added not one, but two ankle bracelets on her left ankle.

She also opted for both a bracelet and a wrist watch, but no necklace. Small earrings completed the jewels’ department. Kylie kept her hair in a bun and went for accenting, also bronze, makeup without going overboard with it.

In short, it was definitely a great look for Kylie. One to remember.

New smart high heels have a feature which many women might have wanted. They allow... 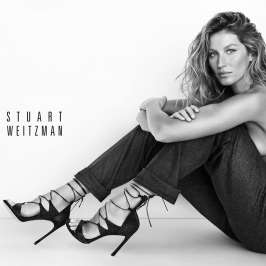 Gisele Bundchen is the face of Stuart Weitzman for this season and as such she...

The 22nd Annual ELLE Women in Hollywood Awards was just held and unsurprisingly was attended...

The wait is finally over! The biggest fashion event of the year, the 2016 Victoria’s...