Mariah Carey is back in the spotlight with her new tour and album. She also has new impressive looks which she loves to show off in high heels.

Mariah has taken to Instagram to post and show off her latest antics. They feature a lot of picture of her in lingerie, high heels, boots, you name it.

One of her latest photos grabbed the attention of the media. In it Mariah is wearing a silk nightie, high heels and… she’s making pizza in a traditional coal oven. Yep.

She has also taken a couple of photos posing as Bianca. “#Bianca returns,” she wrote, referencing the dark-haired villain she played in her 1999 music video for “Heartbreaker”.

She is quite happy with her new looks which she’s achieved with a lot of work. “My diet is very bleak,” she told the Sunday Times. “I overuse the word because there is a lot of bleakness going on. My bleak diet is horrendous, but I don’t want to tell anyone about it because it’s none of their business.”

“I am a pretty insecure person,” she also admitted. “But I have to get over that because this is the reality of my life. I look better than I looked a few months ago, but I am definitely not one of those people who says, ‘I look amazing today.'”

Glasgow about to hit the stage !! #sweetsweetfantasytour 😘😘😘🎶🎶🎶🎶🎶

Finally! Here they are! The best celebrities in high heels for November 2016. Get ready,...

Sharon Stone is and will be one of the all-time greats for many reasons. One...

Sometimes there’s so much stuff going on, we miss out on some of it. Like...

We know there are many celebrities that wear high heels for special events. But there...

Zendaya and Bella Thorne have been friends for quite some time. Even if today their... 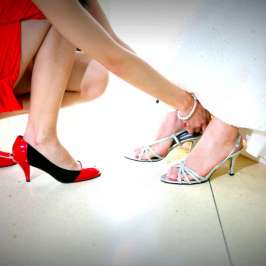 The Italian fashion is always on another level. The street style from the 2015 Milan...