Natasha Poly and Pamela Anderson both have quite the daring style when they want. And they both did so in London on the same day rocking leather and latex.

Both celebs though were at different events. Despite that, they had similar ideas for their outfits – black, shiny and daring.

There were differences, of course. Natasha opted for a more streamlined and elegant look, while Pamela was daring and mystical.

Instead, it had several triangle panels of different fabrics sewn together. Most of the panels were either classic leather or patent leather. And a we panels were suede. Some of them were seemingly “bolted” in place with studs while others were sewn on.

It’s a complex sounding dress, but the result was simple – stunning. Natasha continued the look with a pair of matching black leather booties. They featured the same studs around the ankles and at the base of the soles. The heels of the booties were low and blocky.

Natasha came to the event with a jacket draped on top. But it didn’t stay on for long after she arrived. She rocked accented, heavier makeup around the eyes and styled her hair straight and flat. She wasn’t wearing any jewels, not that she needed them with that sparkling look.

Meanwhile, on the other side of London, Pamela Anderson was attending the Mortons Private Members Club. It was an masquerade event seemingly.

Pamela reminded us of her glory days with a daring skin-tight black latex dress as the main piece of her outfit. It wasn’t polished latex though and had a matte look to it and also some talcum residue at the hemline.

Still, that didn’t seem to bother Pamela at all. She was also rocking a black sheer jacket which was teamed with sheer elbow-length gloves. And a big face mask, too.

And what about the footwear? Well, after such a daring and complex outfit there are only two options. Either go full on daring with high boots, or offset the provocativeness with something elegant.

Pamela opted for the latter. She completed her look with a pair of classic black pointed toe pumps. The shoes featured thin sky high heels which completed Pamela’s daring, but also somehow elegant look. A true head-turner as always! 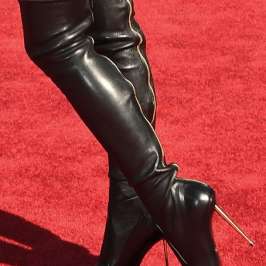 The 2018 Coachella festival is the place to be if you are fan of music.... 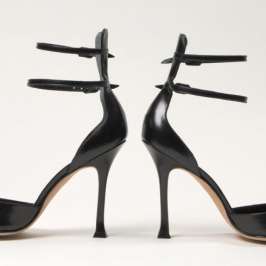 Leather continues to be a top choice for many ladies everywhere. As such it’s no... 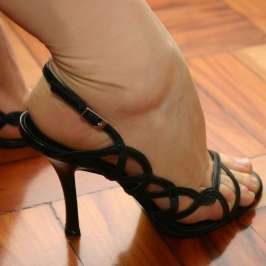 A 36-year old woman with size two feet finally can wear high heels with no...

Shay Mitchell and Penelope Cruz are our latest high heel celebrities of the week. Both...

The 2015 Grammy Awards came and went and we are left with tons of photos...

Sylvester Stallone is known as one of the most stylish celebrities in Hollywood. He wants...