Selena Gomez is definitely turning up the heat over the past few weeks. She impressed at the Billboard Women in Music Awards in an elegant outfit and heels.

The look was yet another notch on the ever impressive fashion belt of Selena. Since she came back to the spotlight, Selena has been changing her look and style.

Instead of one drastic and full change, Selena is making small changes here and there. They are already adding up though. Selena looks very different and it’s almost difficult to recognize her at first sometimes.

Her new look includes a shorter, blond hair, less darker makeup and more accenting tones. And her fashion style is getting very different.

Selena is more brave now. She also opts for more unique looks and styles. And she is visibly more confident in herself. This reflects well on her overall style.

The 2017 Billboard Women in Music Awards were another prime example of this. Selena rocked a very interesting outfit mixing both style and provocativeness into one.

She opted for a suede open top leaving most of her upper body to the elements. Selena then teamed the top with a pair of high-waisted black leather pants.

And they were quite the leather pants. The trouser legs featured several slits almost to mimic a lace-up style at first glance. But it was more like an inverted lace-up with no laces. The same motive was also represented on the back.

Selena teamed the elegant and provocative look with high heels that had these same two qualities. They were fixed to the feet with three straps which featured golden studs. The heels themselves were thin and elegant.

The golden motive from the shoes was well represented on the leather pants with small side zippers, too. The same motive was at the belt-buckle and on Selena’s earrings. This means subtle attention to detail which in the end brings out some great results. Great job by Selena! 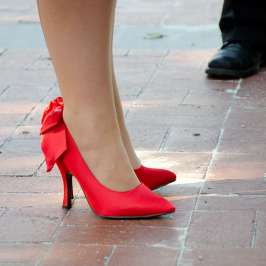 If you love to wear high heels or like this footwear in general, you’ve probably...

ell, it was one of those weeks. Filled with stunning celebrities in impressive outfits and...

Bella Hadid is certainly enjoying a new high in her popularity. She seems to take...

After years of household tips on how to prevent blisters from high heels, scientists have... 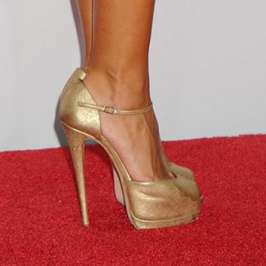 A lot has been said and written about the power of high heels over both...