Shay Mitchell and Mary Elizabeth Winstead were among the many celebrities at the 2017 MTV Movie and TV Awards. They were also among the most stunning ones.

So, we decided to kick off the fashion spotting at the 2017 MTV Movie and TV Awards in LA with them! Then we will explore the rest, too.

Shay Mitchell though was among the first one who caught our attention. Shay rocked an incredible long dress which suited her really well.

The dress was black with golden zebra-like stripes. There were several cutouts around the stomach part of the dress which showed off Shay’s toned body quite well.

She teamed the great dress with a pair of simple and elegant ankle-strapped high heels. They featured thin, but quite high heels with a thin platform.

Shay opted for accenting makeup with bold eyeliner. She left her hair loose, but elegantly styled behind her ears.

Mary Elizabeth Winstead also attracted attention at the 2017 MTV Movie and TV Awards. She opted for a simple blue denim dress with a deep v-neck. The dress featured several accents and details.

Mary teamed it with a pair of elegant white ankle-strapped high heels. They were with thin high heels and no platform. Even so, Mary handled them with ease.

She kept her now trademark hairstyle and added some beautiful red lipstick and a dash of eyeliner to complete her elegant look. A few jewels and accessories completed her style.

And that’s only the start. There were a lot more stunning celebrities in high heels at the 2017 MTV Movie and TV Awards in LA. And we will show them to you, so stay tuned!

Throughout the years Olivia Munn has proven she can be very elegant, daring, provocative, you...

The 2017 Autumn Winter Paris Fashion Week is really almost a fortnight. So, there are... 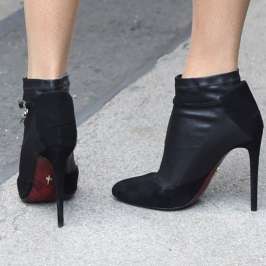 Millions of women all over the world love high heels. But if you have some...

Olivia Culpo is on a serious fashion roll. She continues to impress with one impressive...

A few months ago Victoria Beckham shocked the fashion world when she said she is...

Rachel Stevens is back on her top fashion form as seen at the Pride of...