It’s that time of the year, when high heels take another beating from the press for being the worst thing that has ever happen to women. Here’s why it’s BS.

First things first. We totally agree that the dress code rules are a bit overrated. A woman can look good and classy in many types of shoe, not necessarily a high heel. Especially for jobs which require a lot of standing up and/or walking. There are stylish and comfortable shoes which would look great.

No one should be forced to wear something they don’t feel comfortable in or will impede on them doing their job. With that being said, there should be some guidelines, too as it won’t look good if you turn up to the office on an important day in track pants for example.

This is a very long and complex debate. Because of that it seems most people prefer to go the easy way and simply blame an object – in this case the high heel shoes. Some feminists feel thee heels are the cause of these problems. Have women stop wearing high heels and the problem will be solved, they think.

This has resulted in a wave after wave of hatred towards high heels. These types of shoes are called sexist, dangerous, bad for not only the health of women, but their social standing too. They try to make it look that if you wear heels you are easy and dumb, despite some of the most powerful women being high heel fans.

Even so, every incident involving high heels is immediately blown over proportion and used to shame the shoes. It’s getting close to the point when women who like high heels would be publicly ridiculed and shamed simply because of a pair of shoes. It is getting THAT ridiculous.

Yes, high heels are not for everyone and it is perfectly fine. It doesn’t mean that people who do like them and feel good on them should be shamed for it.

The ones that should be shamed are the businesses, employers and others who force their opinion on others and demand the rest to listen. This includes both people who force employees to wear high heels when they don’t want to AND people who say high heels are the root of all evil and should be outlawed for everyone.

Instead, why not focus this energy on finding the balance? Let people who don’t want to wear high heels not wear them. But also let people who do like high heels to wear them and not have shaming fingers pointing at them for being mindless. This is the mistake our society makes these days. It tries to compartmentalize everything and separate everything, instead of joining together. People are constantly being pulled apart and divided by “experts” and “activists” who draw imaginary lines and say things like “if you don’t like this or that you are wrong and you should be ashamed and people who support us should stay away from you”.

When these dividers reach something as simple as a pair of shoes, you know the society is troubled. Here is some news for these people: we have friends who adore high heels and friends who would prefer to walk on thumbtacks if it would mean they can avoid wearing heels. Both types of friends are able to respect the others’ choices and opinions, coexist and have a great time together and be actual friends and human beings. It’s easy if you try… Try it.

Embed from Getty Images Kimberley Garner is the latest winner of our high heel celebrity... 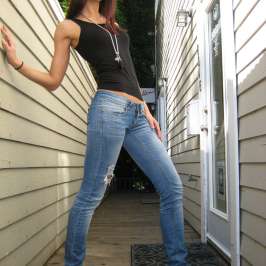 The past few days have put skinny jeans in the fire after it was claimed...

Chrissy Teigen is our latest winner of the high heel celebrity of the week chart...