The 2015 Grammy Awards came and went and we are left with tons of photos of celebrities in high heels that are worth checking out. Taylor Swift is at the front of theline yet again.

This year she managed to wow everybody with both a great dress and a pair of nice pink strappy high heels. But she wasn’t the only one that made an impact.

Lady Gaga for example showed off an entirely new look which stunned everybody. And not only singer managed to grab the attention but actresses too.

You know, instead of just telling you about it, why not show you? Here are

The best celebrities in high heels at the 2015 Grammy Awards

As we said, we start with Taylor Swift. Given she is at the height of her popularity right now it seem fitting. Taylor seems to manage to use this in the best possible ways by continuingly improving her look.

At the 2015 Grammy Awards Taylor Swift showed up in a stunning dress which turned all the attention to her legs and her suede custom Giuseppe Zanotti strappy stiletto platforms. Mind you, as custom as they are, the same style was worn by Naomi Watts at the Golden Globes. Not that it is so important.

Madonna still has it. The queen of pop went all out for her 2015 Grammy red carpet appereance with a pair of black leather thigh high boots. But not any over the knee boots. These had a lace-up part at the ankles, open toes and a half-wedge style heel. The part of the high heel that is exposed is real gold. The boots were custom made for Madonna by Givenchy.

Lady Gaga on the other hand showed she knows how to attract attention without being dressed in meat. Actually Lady Gaga did amazingly well and stunned everyone at the 2015 Grammys when she showed up in a glittering silver dress that were paired with equally attracting high heels from Stuart Weitzman.

We already know Ariana Grande loves high heels. She proved this one again at the 2015 Grammy Awards when she showed up in a beautiful long dress and equally sexy high heels. Both items made by Versace.

Next up is Katy Perry. She decided to change her look quite a bit. And while we are not sure about her hair or dress, we do approve of her high heels. They are made by Sophia Webster and feature comfortable straps and glittering heels.

As we said not only singers were drawing attention for their outfits and high heels. We loved Gwyneth Paltrow’s outfit and high heels. Nice red with both gold and mesh accents.

Other actresses made an impression too. Like Nicole Kidman for example. Her classy outfit was completed thanks to a pair of strappy high heels.

It seemed that long evening dresses were the main choice for most celebrities during the Grammy Awards. Most had opted for long dresses that hide their feet completely. But Anna Kendrick showed that you can be very sexy and attractive in a pair of pants, too. Especially when paired with a pair of Jimmy Choo’s Darilyn high heels.

Courteney Cox also drew our attention. She had opted for a short glittery dress that she paired with a pair of black strappy high heels with a little platform.

Beyonce also had opted for a floor lenght dress for the red carpet bit of the 2015 Grammy Awards. But when she performed on the stage later on, Beyonce was in a more traditional light. All legs.

There were a lot more celebrities in high heels at the 2015 Grammy Awards. We chose some of the best looking, but we certainly don’t think that the ladies above are the only ones that looked great. They are just our current favorites. 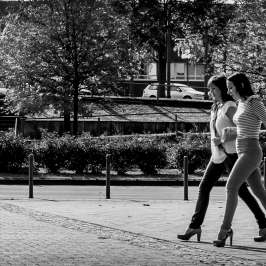 High heels can make you look and feel like a million bucks, but they can...

Charlize Theron is among the celebrities who usually are quite selective with their outfits and...

This time we once again have two high heel celebrities of the week. They are... 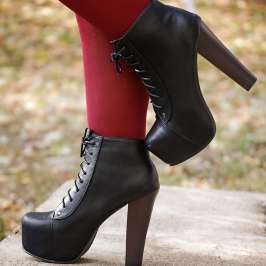 The Autumn is arriving fast. At least in the Northern Hemisphere. This means it’s time... 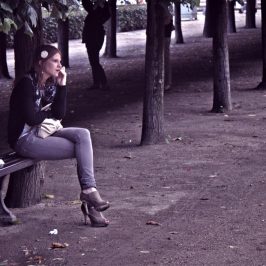 Jeans and high heels are a fashion classic. It was a bit on the back...