The movie Fifty Shades of Grey is a bit controversial, but that’s what makes the news these days. And celebrities in high heels are crowding the red carpet to see the movie premiere.

So we decided to see exactly what high heels the celebrities choose when they go to see such a provocative movie. We weren’t disappointed. Here they are,

We start with Maria Menonous. The TV star arrived with a relatively modest look. She had on a long coat and a black top. A pair of tight leather pants added some edge to her outft. Maria Menonous had chosen a pair of strappy high heels with chunky heels.

Alexis Knapp on the other hand had chosen a pair of extravagant boots with cuts and lots of buckles. Definately up to the standarts in Fifty Shades of Grey.

Ashley Roberts also was on the more provocative side. She had opted for a black suit with pants. Sounds sensible, right? But Ashley also had a very opened top completed with a gold chain. Also golden were her high heels which featured ankle straps and nice details at the toes.

Jamelia also had opted for a more sexy look. Her short red dress was paired with black high heels with ankle straps and small platforms at the toes.

As one of the stars in Fifty Shades of Grey Dakota Johnson had a lot of work in promoting the movie. She went to quite a few ot the major premiers in the big cities and markets. Two of her looks stood out quite a lot.

The first one is from the premiere of Fifty Shades of Grey in London. There Dakota wore a very long white dress that hid her legs completely. But it was possible to take a glimpse of them while Dakota was entereing and exiting cars. And no surprise there, her heels were as glamorous as her.

The second great look of Dakota Johnson was at the Fifty Shades of Grey premiere in Berlin. There Dakota wore a long black dress which again was hiding her legs completely. But this time the dress had a slit that showed of her feet and high heels from time to time. Dakota had again chosen glittering high heels. This time black and with ankle straps.

As always we will continue to be on the look out for more celebrities in high heels and how they look on the various events. So stay tuned! 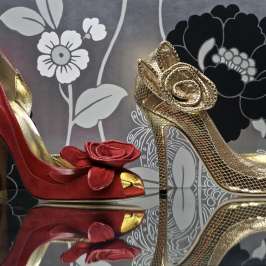 The New Year is finally here! We at GlamorousHeels would like to extend special wishes... 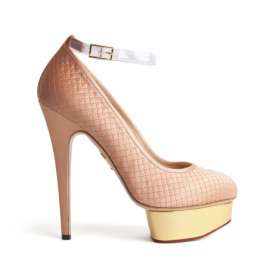 Platform high heels can be a great way to make you look taller, sliimer and...

Most people go for something casual and comfortable when travelling. Not Paris Hilton. She wowed...

The “Pride and Prejudice and Zombies” movie premiere was just held in London and it...

Kendall Jenner started this week with a stunner of an outfit and no one came...

Kimberley Garner is our new winner of the high heel celebrity of the week. She...