Well, one of the busiest months for celebrities is over. February is the time of the year with the most award shows and events. Perfect for lots of heels.

And lots of fashion moments, too. Some were great, others not so much. There were so many it’s not even possible to cover them all. Nor is it needed, though.

During February 2017 we already covered a bunch of the best events. We’ve seen a lot of high heels at many events.

For example, the 2017 Oscar Ceremony. And then the after party for the Oscars.

Then, there were the Grammy Awards for 2017. And a lot of other events like the 2017 BRIT Awards, too. Also, let’s not forget the many fashion shows and other celebrity spotting.

So, we decided to do what we always do during such busy events. Look at the rest of the celebrities and events we didn’t cover. If somebody stands out after so many top events and stunning celebs, you know they are among the best high heel celebrities of February 2017. So, enjoy

Kim Kardashian loves to show off her new slim figure in more and more daring...

How should one dress for the Golden Heart Awards in New York? In gold of...

Sara Sampaio wowed on the streets of New York in her daring idea of a... 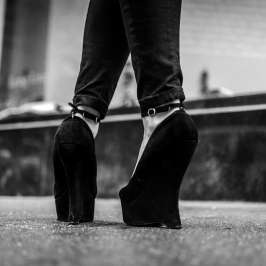 As freeing and self-expressing fashion can be, it also has many rules. Some of them...