The 2017 Victoria’s Secret Fashion Show was in Shanghai and it was stunning. But what was even more stunning were some of the supermodels at the after party.

That was a fashion show in its own right. And actually was a bit more interesting, since the ladies could showcase their personal styles and tastes.

And they didn’t disappoint. All of them were impressive. But, of course, some of them were standing out a bit more. And here they are.

Candice also rocked a pair of strappy high heels to complete her look. The shoes were very, very high with no platform, but Candice handled them with ease.

Next we have Bella Hadid. She stuck to her love for long, provocative gowns. Bella rocked a fitted red dress with a low neckline, a cutout at the hip and a sky high daring split over the left leg.

Bella opted for simpler high heels, with only very thin straps to keep them in place.

Lily Aldridge on the other hand preferred a far more complex outfit. She rocked an elegant long gown. It also had a low neckline and a high hemline.

But the dress also featured a very long layered train. And Lily also continued the impressive look with the footwear. She wowed with strapped, studded high heels reaching all the way to the knee.

Karlie Kloss on the other hand decided to keep it simple, yet very elegant. She opted for a fitted black sequin dress with one sleeve and asymmetric shoulders.

Karlie teamed the dress with a pair of equally elegant black high heels. The classic pumps featured daringly high and thin heels, a staple for Louboutin, and which Karlie handled with ease.

Last, but not least, we have one of the longest Victoria’s Secret Angels of all time – Adriana Lima. Still incredible as ever, Adriana opted for a unique outfit.

It featured a glittering and fitted, revealing black top. She teamed it with a long white skirt which was equally revealing thanks to the high split over the entire right leg.

Adriana rocked classic black high heels, pretty much the same as Karlie’s. But the overall look and feel of the outfit was completely different. And Adriana’s confidence modeling in it further added to that effect.

High heels are awesome, but also quite specific. What’s comfortable for one person can be...

Your high heels look gramorous and beautiful… until they meet with the real world where... 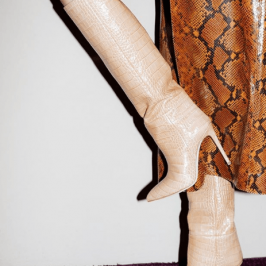 There are plenty of shoe brands out there. They are so many, that you can...

The 2017 Nickelodeon Kid’s Choice Awards gathered quite a lot of celebrities in high heels....

Nicole Scherzinger is no stranger to the daring outfits. Usually she gets them perfectly, but...

Celine Dion usually has a very elegant and even modest style. Even so, that doesn’t...