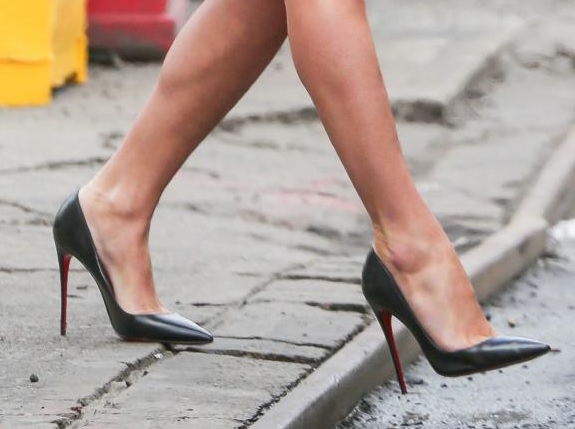 March 2015 was pretty busy for celebrities. The weather was a bit warmer which allowed for some freedom in the choice of high heels which the celebs wore.

Contrary to what fashion analysts and designers are saying, high heels with ankle straps continue to be one of the main choice of many celebrities.

Nothing bad about that, simply noting that sometimes fashion expectrations and reality are a bit different.

But enough about that. Let’s check out the

As always we have no particular order, these are simply the celebrities in high heels that won the most of our attention throughout the month. We begin with Hilary Duff. She definately looks transformed for a while now. She was spotted in New York in a pair of white high heels with lots of black dots and red line along the edges and seams.

Nicky Hilton grabbed everyones attention in downtown New York when she was catching a cab. That is one lucky driver. Stylish as always Nicky had chosen a pair of seemingly Christian Louboutin’s thinnest killer heels possible. Yet, she had no problems handling them.

When at the ITV Studios in London recently, Jodie Marsh opted to wear a pair of very sweet high heels. So sweet they looked like actual cakes. Complete with a cherry on top. Tasty.

Surprise, surprise, Taylor Swift is making our list again. What can we say, she has a great taste in high heels. Here she is at the 2015 iHeartRadio Musc Awards looking as stunning as ever, this time in a pair of strappy high heels.

Beyonce also loves to set her look apart from the rest. She also continues the strend of strappy high heels, but with an added touch. Here she is going to an event in New York.

Ariana Grande always puts a lot of effort in her outfits and choices of high heels. Including when she is performing of course. We quite liked her sparkling high heels from her concert at the American Airlines Arena in Miami.

Khole Kardasian is trying to carse her own path which is great. She also likes to showcase her love for high heels as often as possible. When promoting her Kardashian Beauty line in West Hills, Khole had chosen a pair of red ankle strapped high heels with golden detailing.

You can always rely on Jennifer Lopez to find yet another stunning look that you haven’t seen. Here she is ariving for the American Idol studio. What more is there to tell or describe?

Karina Smirnoff also very often chooses a pair of great high heels. She also proves that brighter and braver colors can also work very good. Here she is at the 28th Annual Nickelodeon Awards in a pair of bright yellow high heels.

After what seemed like ages Olga Kurylenko is back in the spotlight and we are pretty happy about that. We are also happy that she has preserved her taste and all of her recent appreances were stunning. We chose the red carpet at the El Maestro del Agua premiere as it combined the most of Olga’s stylish taste with a bit of personal touch. In this case her heart-warming strappy high heels.

Last but not least we have Vanessa Hudgens. March had its fair share of days with bad weather and Vanessa had to go out in one of them for her Broadway show. She opted for a great outfit completed by a pair of brown over-the-knee leather boots.

Well, those are our favorite celebrities in high heels for March 2015. Stay tuned for more.

Some more stunning and daring celebrities from Halloween parties are popping up on the net....

Chrissy Teigen impresses with a stunning outfit when she’s out and about in West Hollywood....

Did you know you can wear high heels and still appear shorter? Oh, yes you... 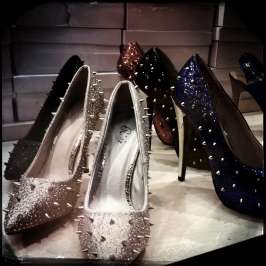 Up for a night of partying? High heels are the footwear of choice but often... 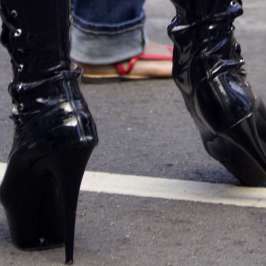 In a question of who to believe anymore, after all the hate and health warnings...

Bella Thorne once again wins the high heel celebrity of the week! She climbs to...